Shruti and other sound frequency concepts:

Shrutis are 22 microtonal intervals or minute sound frequencies in a saptak that are dwelt on and can be distinguished as different from eachother by the human ear.

The various concepts related to sound frequencies and the difference between them:

Dhwani: Any Dhwani means sound. So any sound frequency that can be heard by the human/animal ear is a dhwani.

Naad: Naad is a Dhwani that has relatively consistent sound properties i.e. consistency of frequency, amplitude and timbre. It is thus ‘musical sound’ or ‘sangitik dhwani’ as it becomes pleasing to the human ear to its consistent properties.

Shruti: Saptak is a range of musical sound frequencies and thus there are infinite naads in the saptak. To create music, you need to ‘dwell’ on certain naads. Musicologists, with the help of natural consonant laws and mathematical calculations have identified 22 naads out of these infinite naads that can be ‘dwelt’ on in order to produce defining music. These 22 musical sound frequencies are called shrutis.

Swaras: Each raag or melodic composition requires certain kinds of shruti in order to set a specific mood (as the correct mood in Indian Classical music performance is achieved only with proper pitching which comes with the proper use of shrutis). The chosen shrutis thus become the representatives of the swara of that raag i.e. they become the swaras of the raag!

So every swara is a shruti, and every shruti is a naad, every naad is a dhwani but the vice versa is not true. 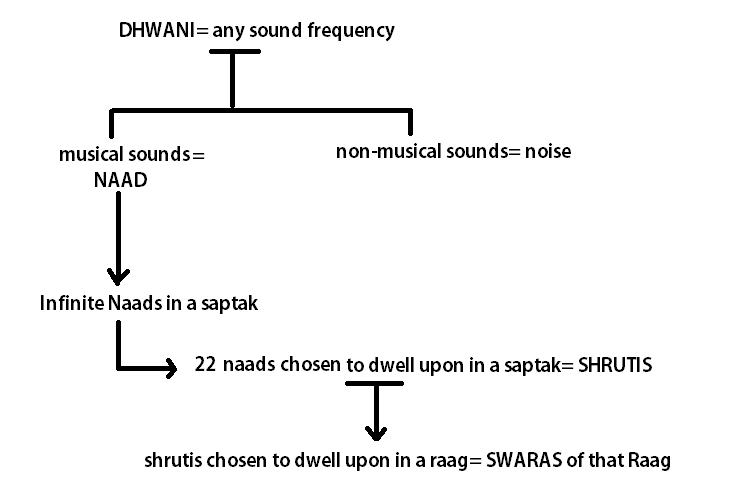